100 years before Jurassic Park, comes this short black and white silent film. Not quite a blockbuster, but it is the oldest footage of actors performing a role on film.

The actors were a blacksmith (centre) and employees of the Edison Manufacturing Company.

If you could call it a plot… A single stationary camera centres on an anvil. The blacksmith stands behind it and strikers stand to either side. The blacksmith was the only professional, the other two were Edison employees.

The central character takes a metal rod heated in a fire and places it on the anvil. The workers start hammering the rod in a rhythm. The metal rod is then returned to the fire to be reheated.

This is clearly a cue for a break, as one of the strikers produces a bottle of beer. They each take a hefty swig and then continue hammering away.

Filmed by William K.L. Dickson, while working for the Edison Manufacturing Company, it was also the first Kinetoscope film shown in public.

It is the second-oldest film included in the National Film Registry, after another Edison production, ‘Newark Athlete’ (1891).

The original film is silent. 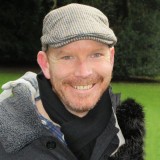